Lesson Plans, the Play and History

Explored Through The Lens of Roman Culture

ALL SUBJECTS LINKED TO ROME

The lessons in Julius Caesar and Ancient Rome enable students to conquer Shakespeare’s figurative language without paraphrasing it. This interdisciplinary NEXUS volume includes a dramatic reenactment of the Battle of Philippi based on primary sources, an examination of partisan politics in post-Caesar Rome, the political role of the gladiatorial games, ancient art, and the physics of the catapult.

“All NEXUS volumes emphasize the critical skills and analogical thinking that are crucial for success on the SAT.”

Photographs of Roman Arena in Nimes, France and Triumphal Arch in Orange, France by Gloria Wilder 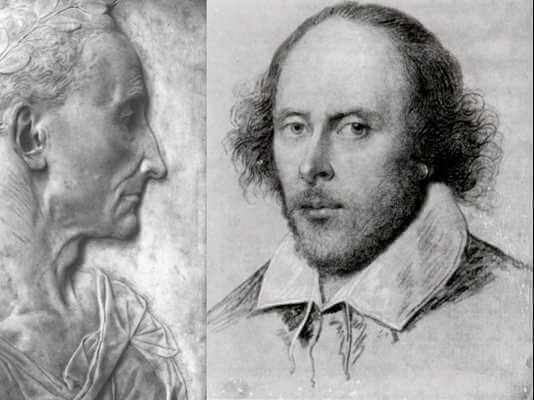 Lesson on Shakespeare’s Language and the Writings of Julius Caesar

Students learn to recognize, explicate and appreciate Shakespeare’s complex figurative language by using a 4-step explication method that satisfies Common Core Standards and serves as a rigorous mental aerobics for students that will dramatically upgrade their reading skills. Also, students learn to explore and recognize the relevance and universality of Shakespeare’s psychological insights and similar insights made by the real Julius Caesar in his Civil War by linking them resonantly to their own lives.

For more on Shakespeare’s figurative language see Macbeth & the Dark Ages and Romeo and Juliet and the Renaissance. 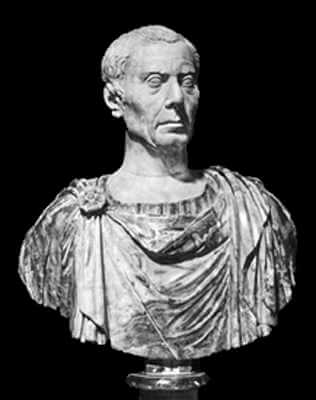 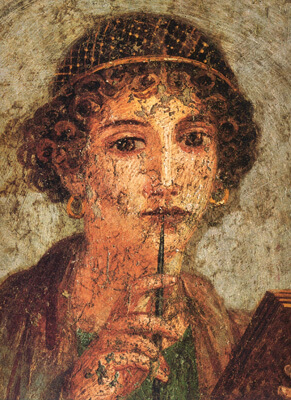 In this fascinating and engaging lesson students examine poems by Horace that discuss (often sarcastically) the oppressive class system in Ancient Rome, which Horace links to vanity and pride (and which we ask students to compare to modern-day cliques). Students also explore love poems by Ovid, literary censorship under Augustus, and poems that kowtow to the emperor, in this case, Augustus. (Visit the Poetry Foundation website for excellent bios on Horace and Ovid.)

The poetry excerpts we’ve selected paint a vivid picture of Roman social life, providing students with a rich context for Shakespeare’s tragedy and helping them to better understand and appreciate the power struggles in Julius Caesar and their political fallout.

All Roads Lead to Roman History 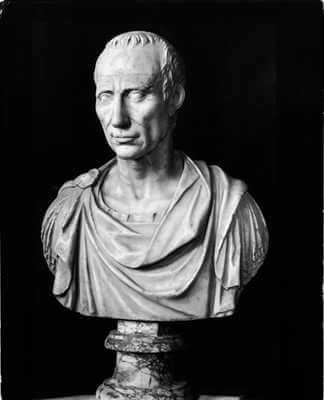 This lesson  introduces students to the flesh-and-blood Caesar, quoting substantially from primary sources, including Cicero’s letters and Caesar’s writings.

“This chapter draws on compelling details from Sallust, Appian, Dio Cassius, Cicero, and Plutarch to illustrate Caesar’s brilliance as well as his deviousness. A subsection on Caesar’s self-confidence and his vanity sums up his contradictions smartly, concluding where Shakespeare’s play begins.” – The College Board

Using primary sources, students examine the relationships between the real Brutus, Caesar, Cassius and Portia. Understanding the backstories of Shakespeare’s Julius Caesar (the soap opera behind the scenes) makes the  tragedy much more compelling and relevant for students. In this lesson and the subsequent two-part module “Aftermath of the Assassination” on Antony, Octavius and Cicero, students  also investigate the nature of political alliances (what drives them) and the motivations and machinations of clever politicians and demagogues, which will help them to intelligently negotiate today’s complex political terrain. 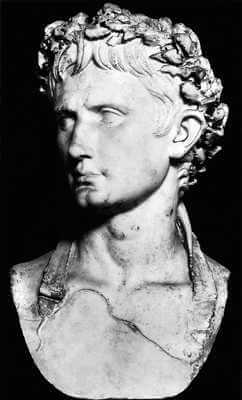 Mark Antony and Octavius, “Aftermath of the Assassination” (a two-part chapter – see below for Part II)

In this dramatic lesson students examine the post-assassination alliance and subsequent power struggle between the historical Mark Antony and Octavius/Augustus, comparing and contrasting Shakespeare’s account with those of ancient sources. The lesson also explores how the young Octavius nurtured a relationship with Cicero (despite Cicero’s support of the assassins) to leverage power against Antony. 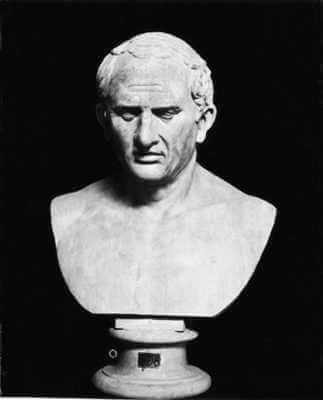 Students read selected portions of Cicero’s masterful Second Philippic that illustrate the power struggle between Cicero and Antony (the struggle between a true Republican and a demagogue), demonstrate the power of political rhetoric, highlight and elucidate descriptions of Antony in the play by Caesar (“Antony that revels long o’nights”) and by Cassius who calls Anthony “a masker and a reveller,” and help students understand Octavius’ betrayal of Cicero whose proscription (they will learn from this lesson) was demanded by Antony for personal reasons.

MESSALA: …by proscription and bills of outlawry,

Have put to death an hundred senators.

BRUTUS:  Therein our letters do not well agree;

Mine speak of seventy senators that died

By their proscriptions. Cicero being one.

And by that order of proscription.

Often students find the Battle of Philippi section of Julius Caesar tedious and uninteresting. “Blood of the Republic, Battle of Philippi” is an exciting narrative re-enactment of the actual battle, based on ancient accounts by Plutarch and Appian and modern scholarship, which The College Board states “elucidates Act V of Shakespeare’s play bringing it vividly to life for students.” 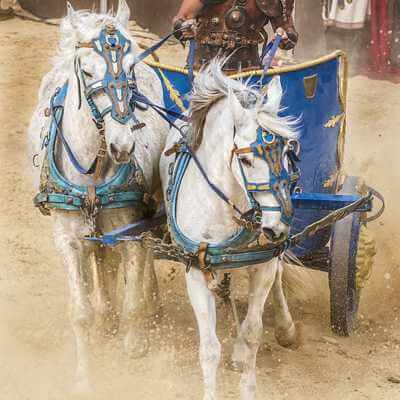 The Gladiators and Arenas of Rome

Students explore the Roman games and their political functions from the time of Julius Caesar to the reign of Commodus with dramatic details and accounts from Dio Cassius,  Seutonius, and Cicero.

TEXT SAMPLE: “[Julius] Caesar and Pompey made gladiator games a key part of their political campaigns. People came to expect gladiatorial games in any Roman election. Today we look forward to national political rallies on television. The Romans expected blood duels, paid for by the candidates. The more dramatic the duels, the more votes the candidate usually got…” 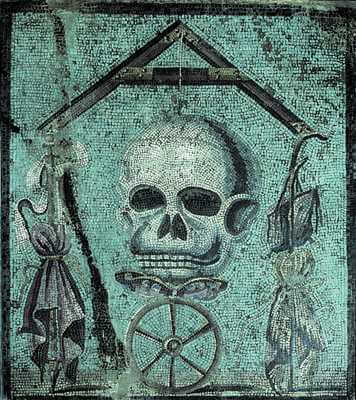 This section “reinforces figurative language reading skills through wonderful illustrations of illusionistic mosaics, portraiture, and sculpture.” The College Board 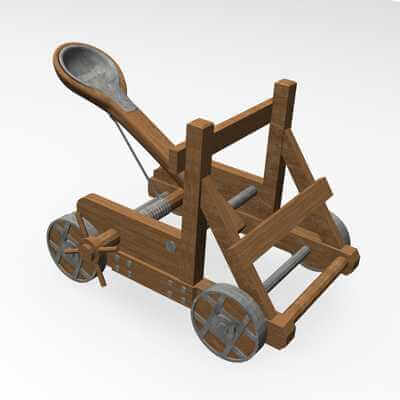 The Physics of the Catapult

Historian of technology and Purdue Associate Professor Vernard Foley (a frequent contributor to Scientific American) helps students investigate the physics and math of the catapult, including how to extract cube-roots using calipers, as the Roman’s did, and how to calculate firing distances based on the weight of armatures.

SUPPLEMENTS (photocopying NEXUS booklets, lessons and supplements is NOT permitted.)

This NEXUS supplement chronicles the Spartacus's slave uprising from it's beginnings at the gladiatorial school in Capua, where 78 trainee gladiators overcame their Roman guards with kitchen utensils, to the Slave/Gladiator army's sweeping victories across the Italian peninsula, and to its last stand against the twelve legions of Crassus.

TEXT SAMPLE: "Two hundred of the trainees plotted an escape. But before they could carry out their plan, they were discovered.  Nevertheless, 78 of them invaded the school kitchen, stealing knives and anything else they could use as weapons. Armed with kitchenware, the gladiators fought their way to freedom. While fleeing from the city, they encountered several wagons loaded with gladiator arms. They seized these, then hid in the green slopes of Mount Vesuvius, the volcano that 100 years later would bury the cities of Pompeii and Herculaneum.

Soldiers from Capua pursued them into the mountains. But the gladiators slaughtered them and confiscated their weapons. Now well-armed, these highly trained fighting machines were a formidable force. What Roman soldier could stand up to a gladiator, even a trainee.  After all, Roman soldiers spent more time building roads, bridges and fortifications than fighting. Gladiators practiced combat skills all day long..." 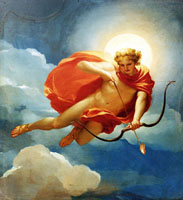 The city of Rome passed laws requiring all structures to be built according to strict laws that took advantage of solar heat.

TEXT SAMPLE: "It’s obvious that in the Northern Hemisphere it is the south side of a house or building that catches the most sun. But how many of us live in buildings that take full advantage of this fact? The Roman architect Vitruvius made this a fundamental design feature in his housing recommendations. In developed centers like Rome, laws were passed that prevented anyone from erecting a new building that blocked an older structure’s access to the sun."

"The Romans planned entire suburbs in which every house faced the southwest, had few openings to the north or east, and included partial walls around the sun-exposed openings to allow the heated air within to circulate rather than to leak away.  These partial walls consisted of..." 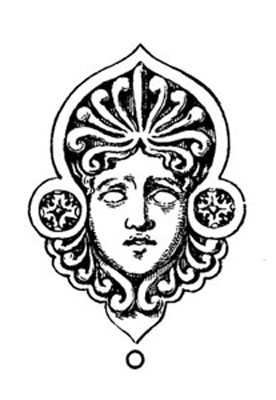 Students explore ways in which the Roman writer and stoic philosopher Seneca influenced Shakespeare. This supplement is designed for advanced students.

"Seneca’s achievements as a philosopher who had been politically active (at one time he was more or less de facto Roman Emperor), coupled with his stoical suicide, gave his philosophy a prestige comparable with his literary style. This philosophy was Stoicism, one of the great philosophical systems to survive from classical antiquity. Stoicism proved highly congenial to the Renaissance, so much so that there was hardly an intellectual figure in the period – from Pico della Mirandola to Descartes, from Rabelais to Milton  − who did not absorb and adapt some part of its canon. So it is hardly surprising that Stoicism should also make its appearance on the stage in one guise or another.

Early Stoics believed that humans should live in harmony with reason, the fundamental ordering principle of Nature, and rejected both encumbering emotional entanglements and the vagaries of Fortune. They could stand against the buffets of the world, both inner and outer....The Stoic was to be a model of self-possession: deliberate and rational in action, moderate in feeling, stalwart in adversity, and subservient to nothing, like the historical Cato and Shakespeare’s Brutus. When in Act IV, Scene 3, Messala reports to Brutus that his wife Portia has died, he simply says, "Why, farewell, Portia. We must die, Messala./With meditating that she must die once,/I have the patience to endure it now." Stoicism offered a picture of the self in disdainful withdrawal from contamination and compromise. Both under the tyrannies of the early Roman emperors, who preyed heavily on the Roman aristocracy with its memories of Republican liberty, and in the often dangerous world of the Renaissance court with its competitive and capricious princes, the picture of an inviolable self with its indomitably independent will was especially attractive....As Hamlet insists, voicing such an ideal of his friend Horatio (who is “more an antique Roman than a Dane”):"

Give me that man

That is not passion's slave, and I will wear him

In my heart’s core, ay, in my heart of heart,

Shop Now
We use cookies to ensure that we give you the best experience on our website. If you continue to use this site we will assume that you are happy with it.OkRead more