The Grapes of Wrath & the American Dream

“The exercises in this exhilarating volume focus on observation skills; theme, variation, and repetition in the novel; period music, and art. Its 11 chapters reveal the social production of art in action by showing the interpenetration of all the arts—painting, music, film, journalism, theater, and novels—to produce social change. A sure-fire hit with students.”

Chapters are LACED WITH DRAMATIC MINI NARRATIVES AND CAPTIVATING ANECDOTES THAT GRAB AND HOLD STUDENTS’ ATTENTION.

(SEE TEXT SAMPLES BELOW IN GREEN.)

NEXUS booklets are not written like the typical dry textbook.

EVERY PAGE ENGAGES and STIMULATES CRITICAL and CREATIVE THINKING.

Writers and consultants in this volume include preeminent Steinbeck scholar Robert DeMott, editor of Working Days, The Journals of The Grapes of Wrath and author of Steinbeck’s Typewriter: Essays on His Art. DeMott also wrote the introduction to The Grapes of Wrath (Penguin Classics Series)and serves on the Steinbeck Review editorial board.

Susan Shillinglaw, former director of the Steinbeck Research Center at San Jose State Univ., co-author of A Journey into Steinbeck’s California, and editor of Steinbeck’s The Winter of Our Discontent.

Lorraine Brown, former director of the Research Center for Federal Theatre at George Mason Univ. and co-author of Free Adult, Uncensored, the Living History of the Federal Theatre Project.

Francis V. O’Connor, preeminent mural scholar, author of The WPA Era: Urban Views and Visions and editor of The New Deal Art Projects: An Anthology of Memoirs and Art for the Millions: Essays from the 1930’s by Artists and Administrators of the WPA Federal Art Project.

Marlene Park, co-author of New Deal for Art: The Government Art Projects of the 1930s and Democratic Vistas: Post Offices and Public Art in the New Deal, and former art history professor at CUNY.

Kenneth Bindas, author of All of this Music Belongs to the Nation: The WPA’s Federal Music Project…and Modernity and the Great Depression. History Chair at Kent State Univ. 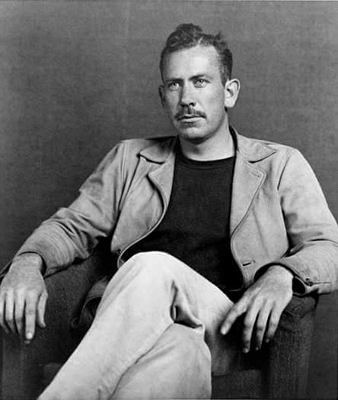 Who is John Steinbeck and Why Did He Write The Grapes of Wrath?

The lesson “The Man Behind the Wrath” teaches students how Steinbeck evolved from awkward adolescent to Nobel Prize-winning activist author and examines the backstory and evolution of The Grapes of Wrath.

“Steinbeck observed the horrendous living conditions of the migrants…during the floods of 1937-38….He went to the flooded area to report on the tragedy, hoping his news articles would pressure local authorities to help. In a letter to his wife Carol, he said, ‘I want to put a tag of shame on the greedy [blankety-blanks] who are responsible for this, but I can best do it through newspapers.'”

This lesson satisfies Common Core Standard CCSS.ELA-LITERACY.RL.9-10.1
Cite strong and thorough textual evidence to support analysis of what the text says explicitly as well as inferences drawn from the text. 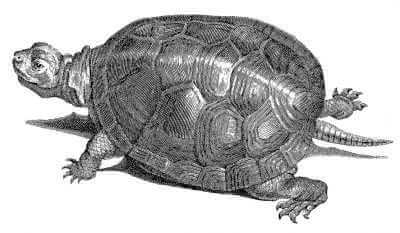 Harvesting Steinbeck’s Symbols in The Grapes of Wrath

In the NEXUS lesson “Harvesting Steinbeck’s Symbols,” students track the turtle and other migrating symbols in The Grapes of Wrath

Chapter 3 of The Grapes of Wrath is a road map, and the turtle – the main “character” in the chapter – is our tour guide. He shows us the thematic route the novel will take. In a sense, the Joads travel the same road the turtle does, the path of change or evolution (sped  up by man’s mistreatment of the land).” [NEXUS, The Grapes of Wrath and the American Dream, p.7]

“The back legs went to work, straining like elephant legs, and the shell tipped to an angle so that the front legs could not reach the level cement plain. But higher and higher the hind legs boosted it, until at last the center of balance was reached, the front tipped down, the front legs scratched at the pavement, and it was up.”

“Nothing can stop the turtle. Like the Joads, he encounters and overcomes obstacle after obstacle. A female driver nearly hits him…” [NEXUS, The Grapes of Wrath and the American Dream, p.7]

This lesson also connects Casy and the turtle; both ride the crest of evolution in the novel. Like the turtle, Casy, the teacher and lapsed preacher, sows the seeds of the future on his spiritual journey through The Grapes of Wrath.

Figurative Language in The Grapes of Wrath.

The lesson includes activities and challenging questions that stimulate students to analyze pivotal passages in Steinbeck’s masterpiece, interpret his metaphors, and connect the politics in The Grapes of Wrath to analogous political situations today.

The Grapes of Wrath Lessons Part III – Learning the Art of Seeing from Steinbeck: 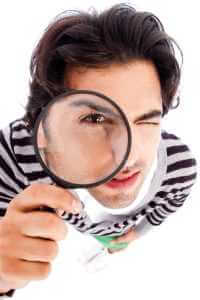 Lessons on Observation in The Grapes of Wrath and Life

The lesson “Steinbeck in Focus – The Art of Seeing ” teaches students to exercise their observation skills while helping them to read The Grapes of Wrath more closely and deeply and to make logical inferences from the text.

“Are your observation skills 20/20? Actually our powers of observation are not usually tested directly, and most schools don’t offer courses that teach students how to see, how to observe. Good observers usually train themselves – like the truck driver in chapter 2 of The Grapes of Wrath.” 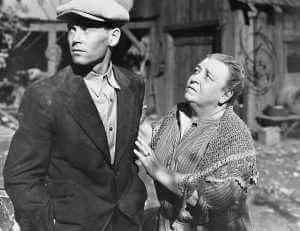 I train my mind all the time….Suppose I pass a guy on the road. I look at him, an’ after I’m past I try to remember ever thing about him, kind a clothes an’ shoes an’ hat, an’ how he walked an’ maybe how tall an’ what weight an’ any scars. I do it pretty good. I can jus’ make a whole picture in my head. [NEXUS, The Grapes of Wrath and the American Dream, p.10]

This lesson, its companion chapter “The Science of Seeing, ” and the NEXUS Supplement “Writing Character Sketches à la Steinbeck,” include activities and exercises designed to sharpen students’ observation skills and help them to appreciate descriptive writing and include it in their own work: 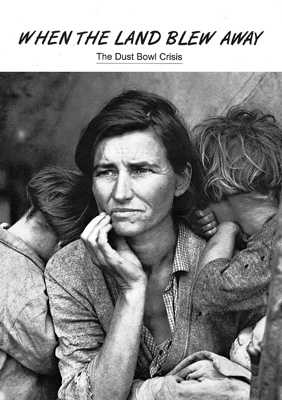 Lesson on the Dust Bowl – When the Land Blew Away

In the dramatic lesson “When the Land Blew Away – The Dust Bowl Crisis,” we invite students to listen to a selection of Woody Guthrie Dust Bowl songs, watch and respond to the Pare Lorentz documentary The Plow that Broke the Plains, and research “Harvest Gypsies,” the series of articles Steinbeck wrote for The San Francisco News . Then, in an essay or project presentation, we ask students to compare and contrast several perspectives of the crisis. 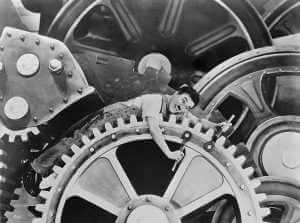 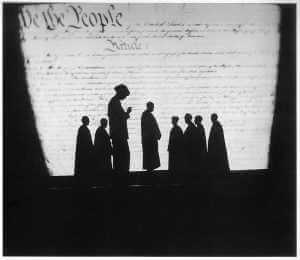 Uncle Sam in the Limelight and Lessons on Living Newspapers

“Living Newspapers were multimedia productions, with projections on scrims (see-through screens that images can be projected on from behind or in front), open staging, aural and visual images, pantomime, dance, news reels, music and a variety of stage levels. Living Newspapers assaulted all the audience’s senses.”

“The Living Newspaper became the most controversial part of the Federal Theatre Project, and FTP director Hallie Flanagan didn’t start out by soft-peddling it. The first Living Newspaper, Ethiopia, tackled the controversial Ethiopian War. But it never made it to the stage. The State Department demanded the show be canceled before opening night. They feared it might upset Fascist Italy and trigger…” [NEXUS, The Grapes of Wrath and the American Dream, p.23] 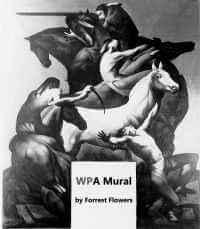 This interactive lesson teaches students to interpret WPA art that reads like visual poetry or visual narrative. Like The Grapes of Wrath, some of the art reflects themes of injustice, marginalization and stigmatization of outsiders and the poor. 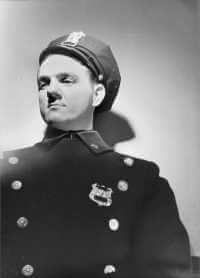 People’s Theater and Steinbeck and the Stage

In the “Steinbeck, the Group Theatre and People’s Teachers” lesson students learn that the historic Group Theatre (Harold Clurman, Cheryl Crawford, Lee Strasberg, Elia Kazan, Francis Farmer, John Garfield, Stella Adler, Sidney Lumet, Lee J. Cobb, Karl Malden and others) and many 30’s “people’s theaters” shared Steinbeck’s belief in the “human family” and, like the author of The Grapes of Wrath, wrote, directed and acted under the assumption that art can and should provoke social change. 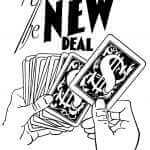 Ihe chapter “The ABCs of the New Deal” teaches students the ins and outs of FDR ‘s efforts to lift America out of the Great Depression through his administration’s innovative “alphabet” programs. 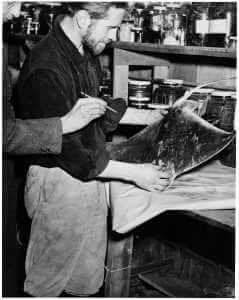 “Careful observation doesn’t necessarily mean looking for the extraordinary in the ordinary (though sometimes it does). More often it is seeing the ordinary for what it really is. And that’s not easy to do. Details are easily overlooked when they’re familiar. Familiarity tends to numb our perceptions. In science we can’t afford to miss details…” [The Grapes of Wrath and the American Dream, pp. 28-29]

Teaching Period Music with The Grapes of Wrath

The chapter “The Depression’s Upbeat, Swing,” teaches students to identify theme and variation patterns in the Swing Music of Benny Goodman, Glenn Miller, and others, and to write their own swing compositions using the most popular tune-pattern of the Swing Era.

NEXUS SUPPLEMENTS can be accessed under the SUPPLEMENTS menu. NOTE: NEXUS supplements and books are protected by U.S. Copyright and cannot be photocopied or downloaded. 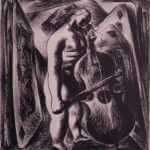 Teaching Guidelines and Supplements for The Grapes of Wrath

Repetition in The Grapes of Wrath, Music and Other Literature 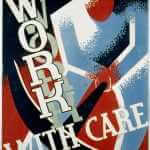 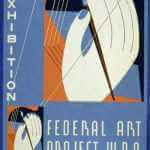 NEXUS is a 501(c)(3) nonprofit based in Cleveland, OH. Our mission is to provide schools with outstanding interdisciplinary resources that inspire students to THINK, LINK and IMAGINE

A portion of our proceeds is donated annually to UNICEF’S Audrey Hepburn All Children in School Fund.