Eleanor of Aquitaine: Queen of France, Queen of England, Queen of Culture

Women in History: Eleanor of Aquitaine

Twice-crowned Eleanor of Aquitaine was not only the queen of France and then England, she was also the Queen of Culture. She is a major figure in medieval literature because she helped establish the first vernacular literature in Europe by patronizing the troubadours and by fostering and helping to disseminate the Arthurian Romances. Her daughter (Marie of Champagne) by Louis VII commissioned the first known story of Lancelot, Chrétien de Troyes’s Lancelot: The Knight of the Cart. Eleanor may have commissioned Chrétien de Troyes’s Yvain, the Knight of the Lion. Her grandfather William IX of Aquitaine is the first known troubadour.

Eleanor also played a direct and indirect role in the Crusades, Pilgrimages, Feudalism, Courtly Love, Gothic Architecture and Heraldry. Much of 12th century can be linked to Eleanor of Aquitaine.  For this reason one NEXUS volume –The Lion in Winter & the Middle Ages – is devoted largely to Eleanor and her enormously influential role in medieval history and literature. 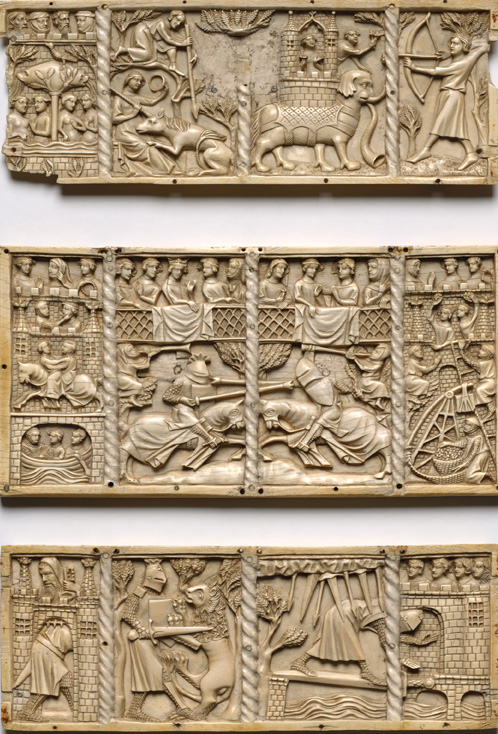 The first known story of Lancelot was commissioned by Marie of Champagne, Eleanor’s daughter. Eleanor probably commissioned another Arthurian romance and was central in spreading the stories of Arthur throughout Europe. The tradition of courtly love was also disseminated from Eleanor’s and Marie’s courts and intimately linked to the Arthurian romances, especially the earliest ones by Chrétien de Troyes. Eleanor’s connection to Courtly Love was so famous—or infamous—that even the monks of Carmina Burana sang about her. The first known troubadour was Eleanor’s grandfather, William IX of Aquitaine. The great love poet of the 12th century, Bernart de Ventadorn, wrote serenades to Eleanor while Henry was away conquering England. Her son Richard the Lionhearted was a troubadour or trouvere (“a sometime poet” in the play). The great troubadour of satire and warfare, Bertran de Born, wrote poems about and presumably for Richard the Lionhearted and his brothers. (Dante assigned Bertran to a place in Hell in The Divine Comedy for sewing discord between the Plantagenet boys and their father, Henry II – Eleanor’s 2nd royal husband).

Chaucer’s The Canterbury Tales of course chronicles a pilgrimage to the shrine of Saint Thomas Becket at Canterbury Cathedral. To facilitate students’ entrance into Chaucer’s world, the NEXUS volume The Lion in Winter and the Middle Ages includes chapter-lessons on Pilgrimages and Relic Cults, both of which are linked to Eleanor of Aquitaine.

One of the greatest extant treasures of relics, the Guelph Treasure – portions of which are in the U.S. today was partly acquired by Eleanor’s son-in-law, Henry the Lion, Duke of Saxony, who also helped pay the ransom for Richard the Lionhearted who was imprisoned in Austria on his return from the 3rd Crusade.  (The story of Robin Hood, of course, is woven around Richard’s capture.)  The play also alludes to the conflict between Henry II and Thomas à Becket, the martyr of Canterbury.  Songs honoring Thomas Becket are  examined in The Lion in Winter and the Middle Ages volume of NEXUS.

Louis VII’s advisor and the regent of France while Eleanor and Louis were on the 2nd Crusade was Abbot Suger, the inventor of Gothic Architecture. Suger was also the Queen’s personal confessor. Eleanor attended the grand opening of the first Gothic cathedral, St. Denis in 1144—built by Suger.  According to legend, Eleanor’s and Louis’s faces–as they appeared on their return from the Crusade–are featured on two jamb statues of the Royal Portal of Chartres.  Eleanor’s favorite son, Richard the Lionhearted, helped pay for Chartres, as did Philip II (also in the play).  Blanche of Castile, Eleanor’s granddaughter and the mother of St. Louis (for whom the Gateway to the American West is named), commissioned the West Rose window of Chartres and signed it with the fleur-de-lys, the coat of arms of France (see the Heraldry supplement).

Eleanor joined her husband Louis VII on the 2nd Crusade.   Her son Richard the Lionhearted led the 3rd Crusade, along with Philip II (who’s also in the play).  Eleanor’s great-grandson, St. Louis, launched the 7th and 8th Crusades.  In NEXUS the Crusades are personalized by teaching them in connection with characters in the play.

Feudalism, which is usually taught as an abstract concept, is made concrete and personalized in the Lion volume by linking it to the central conflict of the play, which is inherently feudalistic and underscores the role of medieval noble women in feudal society, a role that Eleanor of Aquitaine continually undermined.

The 1st known coat of arms belonged to Eleanor’s father-in-law, Geoffrey Plantagenet (who is mentioned several times in the play).  Richard the Lionhearted’s blazonry—three ramping golden lions on a field of red—became the royal coat of arms of England.  Eleanor’s 1st husband, Louis VII, introduced the fleur-de-lys to France.